Chanderi is a town of historical importance in Ashoknagar District of Madhya Pradesh state in India. It is situated at a distance of 127 km from Shivpuri, 37 km from Lalitpur, 55 km from Ashok Nagar and about 45 km from Esagarh It is surrounded by hills southwest of the Betwa River. Chanderi is surrounded by hills, lakes and forests and there are several monuments of the Bundela Rajputs and Malwa sultans. Chanderi finds mention in Mahabharata. Shishupal was the king of Mahabharata period. Chanderi is located strategically on the borders of Malwa and Bundelkhand. 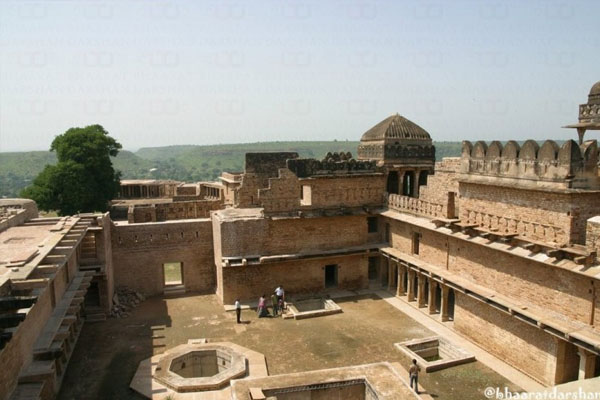 History of Chanderi goes back to the 11th century, when it was dominated by the trade routes of Central India and was proximate to the arterial route to the ancient ports of Gujarat as well as to Malwa, Mewar, Central India and the Deccan. Consequently, Chanderi became an important military outpost.

Dominating the skyline of this lovely old town is a vast Mughal fort known as Chanderi fort. Its main gate is known as the "Khooni Darwaza". Chanderi fort is situated on a hill 71 meter above the town. The fortification walls were constructed mainly by the Muslim rulers of Chanderi. To the southwest of the fort there is a curious gateway called katti-ghatti made through a hill side.

At a distance of 19 km from present Chanderi town is situated the Buddhi (old) Chanderi. Buddhi Chanderi is situated on the banks of Urvashi river. It is believed that the Chaidnagar mentioned in Puranas is same as Buddhi Chanderi. There is a myth that when Raja Nala left Damayanti asleep in the forests of Narwar she moved through dense forests and reached Chaidnagar protecting herself from wild animals. The route through forests from Narwar to Chanderi is very short. A number of 9th and 10th century Jain temples are there in Buddhi Chanderi attracting thousands of Jain pilgrims from all over the country.

View of Chanderi town from Qila Kothi. The Chaubisi Jain temple with 24 shikharas, installed in 1836 by Bhattaraka Harichand of Sonagir, is in the center

Chanderi is mentioned by the Persian scholar Alberuni in 1030. Ghiyas ud din Balban captured the city in 1251 for Nasir ud din Mahmud, Sultan of Delhi. Sultan Mahmud I Khilji of Malwa captured the city in 1438 after a siege of several months. In 1520 Rana Sanga of Mewar captured the city, and gave it to Medini Rai, a rebellious minister of Sultan Mahmud II of Malwa. The Mughal Emperor Babur captured the city from Medini Rai, and in 1540 it was captured by Sher Shah Suri, and added to the governorship of Shujaat Khan. The Mughal Emperor Akbar made the city a sarkar in the subah of Malwa[1]. The Bundela Rajputs captured the city in 1586, and it was held by Ram Sab, a son of Raja Madhukar of Orchha. In 1680 Devi Singh Bundela was made governor of the city, and Chanderi remained in the hands of his family until it was annexed in 1811 by Jean Baptiste Filose for the Maratha ruler Daulat Rao Sindhia of Gwalior. The city was transferred to the British in 1844. The British lost control of the city during the Revolt of 1857, and the city was recaptured by Sir Hugh Rose on 14 March 1858. Richard Harte Keatinge led the assault, for which he was awarded the Victoria Cross. The city was transferred back to the Sindhias of Gwalior in 1861, and became part of Isagarh District of Gwalior state. After India's independence in 1947, Gwalior became part of the new state of Madhya Bharat, which was merged into Madhya Pradesh on 1 November 1956.

ccording to Ain-e-Akbari, the autobiography of Akbar, Chanderi had 14000 stone houses and boasted of 384 markets, 360 sapcious caravan sarais (resting place) and 12,000 mosques. Before proceeding to the individual monuments of Chanderi it may be of interest to the visitor to know certain essential characteristics of its historic architecture. A vast majority of he exiting standing monuments at Chanderi were raised in the the years between 1312 A.D. to 1687 A.D. These could be broken down into three main groups,Islamic architecture from the period of the Sultan's of Delhi, the Mughal period, and then which comprise the majority, the Malwa Indo-Islamic. Also there are monuments that are a mixture of these styles. 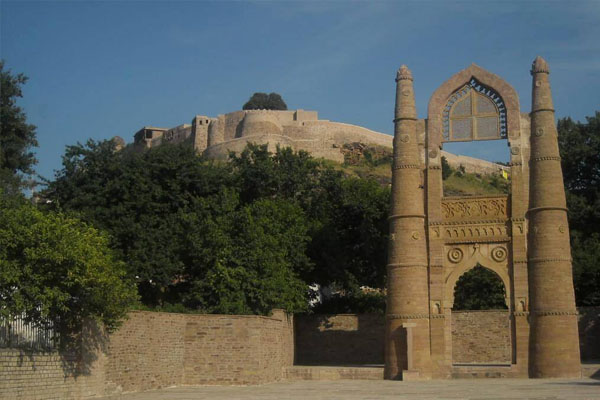 Chanderi has a number of ancient Hindu and Jain temple ruins, fragments, statues, and idols in modern and medieval temples which by style and speculation date probably to the 10th to 13th centuries (no inscriptions on these statues and idols have been found to confirm their dates). Chanderi has over 1000 mosques, over 1000 wells and ponds, 100s of tombs, 100s of temples, and many other monuments, haveli palaces, gates, and other constructions. In this chapter are listed some of the most famous.