Indore is a major city and commercial center of the state of Madhya Pradesh in central India. Indore is located 190 km west of state capital Bhopal. It serves as the headquarters of both the Indore district and Indore division.

Theories explaining the origins and etymology behind Indore's name differ. Formerly, the city of Indore was known by many different names. The first expected name of the city was Indreshwar which was named after the Indreshwar Temple in the city. Before this name was used, it was known as Ahilyanagari (The city of Queen Ahilyabai Holkar).
Year 1607 to 1794 - Ahilyanagari,
Year 1800 to 1950 - Indhur,
Year 1958 till Present - Indore
TThe present name, Indore, originated from the Indreshwar temple constructed in 1741 by Ved Manuj.

The founders of Indore were the ancestors of the present zamindars of the region which spread from the banks of Narmada to the borders of Rajputana. Their headquarters were at a village called Kampel. In Mughal times, the founders of these families received the title of Chaudhari, which established their claim to the land. In the 18th century, the control of Malwa passed to the Peshwa clan, and the Chaudharis came to be known as "Mandloi"s (derived from Mandals meaning districts). The Holkars conferred the title of Rao Raja upon the family.The family retained its possessions of royalty, which included having an elephant, Nishan, Danka and Gadi even after the advent of Holkars and also retained the right of performing the first puja of Dushera (Shami Pujan) before the Holkar rulers.

Under Mughal rule, the family enjoyed great influence and was accorded confirmatory sanads by the Emperors Aurangzeb, Alamgir, and Farukhshayar, confirming their 'Jagir' rights. Rao Nandlal Chaudhary Zamindar, upon visiting the court of Delhi, received a special place in the emperor’s court along with two jewel studded swords (now on display in the Royal British Museum under the family's name) and confirmatory sanads. Raja Savai Jai singh of Jaipur, a personal friend of his, gifted him with a special "Gold Langar" which guaranteed a special place to him in all the Durbars of India. The family’s respectability and influence over Malwa was instrumental in the ascent of the Peshwas and Holkars to rulership of this region.

Rao Nandlal Chaudhary, the founder of Indore, was the Chief Zamindar (landlord), and had an army of 2000 soldiers. In 1713, Nizam was appointed as the controller of the Deccan plateau area, which renewed the struggle between the Marathas and the Mughals.

While visiting the temple of Indreshwar near the banks of river Saraswati, Rao Nandlal found the location to be safe and strategically located, being surrounded by rivers on all sides. He started moving his people in, and constructed the fort of Shree Sansthan Bada Rawala to protect them from harassment by Mughals. The city was named Indrapur (after Lord Indreshwar), and eventually came to be known as Indore.

Baji Rao Peshwa finally took control of Malwa in 1733 A.D. Malhar Rao Holkar was one of the four signatories who guaranteed the proper fulfillment of the conditions.[10] Upon victory the Peshwas appointed Malhar Rao Holkar as a “Subhedar”, which marked the beginning of Holkars' reign in Malwa.

Thus, Indore came to be ruled by the Maratha Maharajas of the Holkar dynasty. The dynasty's founder, Malhar Rao Holkar, (1694–1766), was granted control of Malwa Maratha armies in 1724, and in 1733, was installed as the Maratha governor of the region. By the end of his reign, the Holkar state was de facto independent. He was succeeded by his daughter Ahilyabai Holkar who ruled from 1767 to 1795. She ruled from a palace-fort at Maheshwar, south of Indore on the Narmada River. Ahilyabai Holkar was an architectural patron who donated money for the construction of Hindu temples across India. In 1818, the Holkars were defeated by the British in the Third Anglo-Maratha War, and the Holkar kingdom became a part of the British Raj. 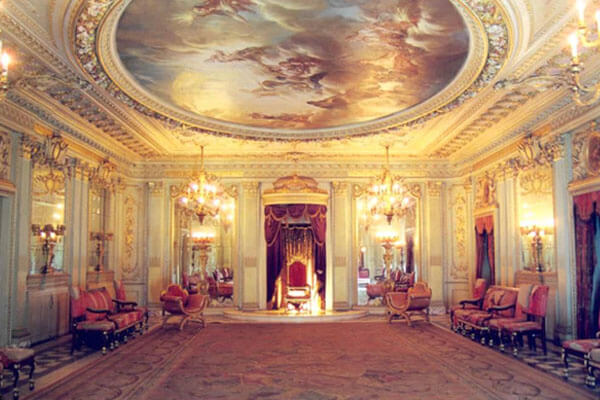 As a result of this defeat in the Battle of Mahidpur, the treaty of Mandsaur was signed, through which the Cantonment town of Mhow was handed over to the British. The treaty also decreed that the capital of the Holkar state would shift from Maheshwar to Indore.

In early 20th century, Indore was very ably ruled by Rai Bahadur Sir Siremal Bapna, who was the Prime Minister, Holkar State from 1923 through 1936, during the reign of HH Maharaja Yeshwant Rao Holkar, the last Holkar ruler under British India. His administration is credited with bringing Indore into the modern age. During his administration, Indore became one of the biggest textile manufacturing center in the country. During Sir Siremal Bapna's administration, Yeshwant Sagar Water Supply Scheme was conceived and implemented. His reign is also marked by various social reforms, promotion of Arts, Music and Sports. Indore was the home of Seth Hukumchand Jain, who became the first Indian to establish a jute mill in India. He is regarded to a pioneer of Indian industry, and a founder of several institutions and industries in Indore and nearby area.

After India's independence in 1947, Indore, along with a number of neighboring princely states, became part of the Indian state of Madhya Bharat. Indore was designated the summer capital of this newly created state. On November 1, 1956, Madhya Bharat was merged into Madhya Pradesh and Bhopal was chosen as the capital. The city palace was the seat of administration of the rulers of the Malwa region – The Holkars (26 May 1728 to 20 April 1948).

After independence, one of the leading citizens of Indore was P.S. Bapna, who was one of the most well known senior IAS officers of Madhya Pradesh. He was the son of Sir Siremal Bapna, the highly respected and long serving Prime Minister of Holkar State. Among P.S. Bapna Saheb's many achievements was the conception and implementation of the first two phases of the Narmada Water Supply Scheme in the 1970s. He was also instrumental in the formation of SGSTI Engineering College and was a creator and enhancer of many social and community organizations.

Indore has a huge concrete Cricket Bat statue with names of the players of the Indian team which won the 1971 series against West Indies led by Gary Sobers. There may not be many of its kind in the World.Sudarshan Chakra of tabla is supposed to be an Indore invention.
Indore is the first city in India to have a Bowling Alley in Sayaji Hotels, a western world favorite, addictive game.
In Indore Internet came long back in 1995 it was in CAT thru its own VSAT hub.
Indore recently had the honor of having IIM, Indore one of the six top Indian busines schools.
CAT, Indore is one amongst the eminent advanced technology research center in India.
Indore's Nehru Stadium became the first cricket groun
Indore's Nehru Stadium became the first cricket ground in India where an international cricket match had to be abandoned due to bad pitch.
There is a city Indore in West Virginia, US as well.