Kanha Tiger Reserve, comprising parts of the Mandla & Balaghat districts of Madhya Pradesh, and located in the "Maikal" hills of the Satpuras, is internationally renowned for its rich floral and faunal attributes.

The Reserve is an excellent interspersion of the Dadars (flat hill tops), grassy expanses, dense forests and riverine forests. It is very rich in flora, largely due to the combination of landforms and soil types, apart from the moist character of the region The rich habitat diversity of the Reserve supports a wide range of wildlife species along with innumerable lesser life forms, and is the sanctum sanctorum of many typical Central Indian fauna. 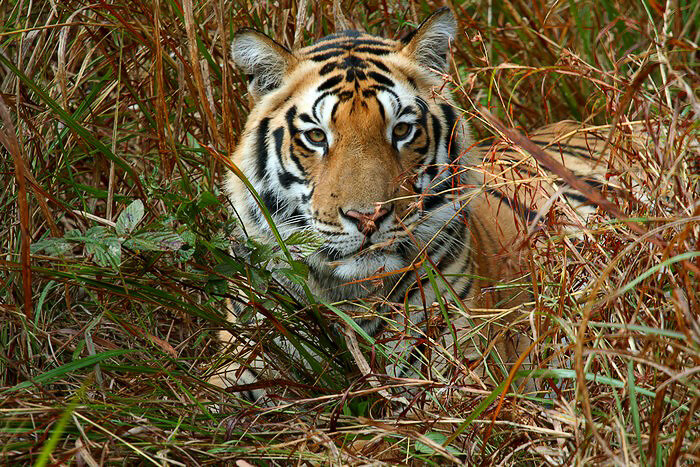 Besides harbouring a viable population of the tiger, Kanha has distinguished itself in saving the endangered hard ground barasingha from extinction, and supporting the last world population of this deer species.

Kanha Tiger Reserve is constituted on a "core-buffer" strategy. The entire National Park area of 940 sq. km. is visualized as a "core zone", free from all biotic disturbances. A buffer zone of 1009 sq. km. surrounding the core is treated as a "multiple use area".

The buffer zone comprises almost 40 per cent of forest area and the rest is constituted by revenue and private land. This zone is characterized by an interspersion of revenue and forest lands, pock-marked with numerous villages. Besides, the Phen Wildlife Sanctuary, a satellitic micro-core of 110 sq. km., is also under the administration of the Reserve Management. 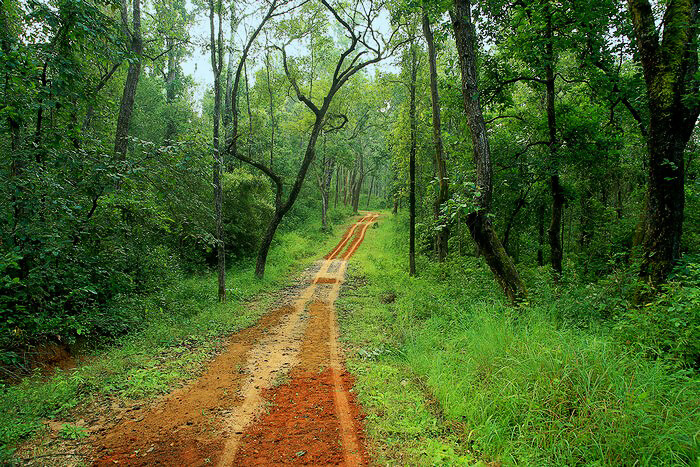 The significance of this micro-core lies in the exchange of gene-pool and dispersal of wildlife populations between the two conservation units. The buffer zone has been notified by the state Government as a separate division and is under the unified control of the Reserve Management.

Wildlife conservation practices and eco-development in the National Park, Buffer Zone and Phen Wildlife Sanctuary are carried out under the Management Plan for the year 2001-2002 to 2010-2011.

The Reserve is a part of the Gondwana tract inhabited traditionally and chiefly by the Gond and Baiga tribes, the latter confining themselves largely to the upper valleys and dadars near the main Maikal range. Information concerning the early history of these forests prior to 1860 is extremely scanty. The villagers had free access to cut and burn forest at will. The system of shifting cultivation, locally called "Bewar" - prevailed almost unhindered until 1870 on the hill slopes.

Technically the following forest types are found in the Tiger Reserve:

Practices, Achievements and Shortfalls Since the core zone of a Project Tiger area should have the least human interference, the Management envisages exclusion of human interference in the form of human settlements, domestic livestock, agriculture and other land use practices, by the gradual relocation of existing habitations. This is required to safeguard the endangered gene-pool of flora and fauna. In the past, 27 forest villages have been relocated at Government expense in a phased manner from the core area of Kanha Tiger Reserve.

Although some extremist engineered activities were reported outside the protected area in the adjoining districts during 1990, the park area remained undisturbed subsequently due to constant and strict vigil and the managerial activities were not hampered. Intensive patrolling is now regularly carried out and various stringent protective measures (coupled with strengthening of wireless network) have been taken, apart from eco-development inputs in the specially constituted buffer zone division.

Special Projects
Under research and monitoring activities, field data collection is carried out in the specially laid out plots, as per guidelines of Project Tiger.
Daily monitoring of the endangered barasingha population is also ensured in the prescribe format.
Cattle immunization programme in core and buffer zones is carried out periodically.

Eco-development Committees
There are 106 EDCs in the buffer and 25 in the core zone involved in various ecodevelopmental initiatives with the Reserve Management.

Protection Squads / Patrolling
Apart from regular patrolling by different level of field staff and officers, two strike forces have been created with vehicular mobility to reinforce protection of the Reserve.

Education and Awareness
The spearhead team has been imparting the necessary skill to other frontline staff of the buffer zone division for site-specific micro-planning. Further, the team frequently convenes village level meetings for promoting awareness amongst the local inhabitants, apart from carrying out meaningful interpretation of PA values.

There is complete control over grazing by cattle in the core i.e. National Park. In the Buffer specific areas have been earmarked for grazing by the cattle of forest / revenue villages under effective grazing schemes.

On the basis of an effective fire scheme fire incidence are kept at minimum by preventive and control measures.

Poaching of fauna and flora

There is no poaching on commercial scale in the Reserve, nor is there any timber maffia operating on the periphery of the reserve. Sporadic cases of subsistence poaching and illicit cutting of poles by indigenous people for their use takes place which are dealt with strictly.

Though there are no criminals and extremists in the real sense of the terms but there is no dearth of the so-called custodians and social activists opposing government policies for the eco-upliftment of the villagers.

During 1976, there was an outbreak of rinderpest. In all 52 Gaur, 8 Sambar and 35 Chital succumbed to the disease. Due to the large population of cattle in the surrounding villages, outbreak of infectious diseases in the Reserve area is always feared. The sal borer (Hoplocerambyx spinicornis) infestation has been notified in Kanha National Park (Core Zone) in a sporadic manner.

The Hindustan Copper Ltd. (around 7 km beyond the buffer boundary).

Matiari Project (around 1 km. away from the buffer boundary).

Control of the Buffer

Buffer is under the unified control of the management of the Reserve.