The past of Khajuraho is shrouded with mystery and conjecture. In the midst of the wilderness full of ferocious animals, there is the small town of Khajuraho standing alone in its solitude with its ancient temples. With hardly any written records and rare references to its origin, the history of Khajuraho has become trapped in the mythical folklore of the region. The beautiful artwork of these temples has gained the attention of the art lovers all over the world but the real purpose behind their construction is a mere guess work of the intellectuals. 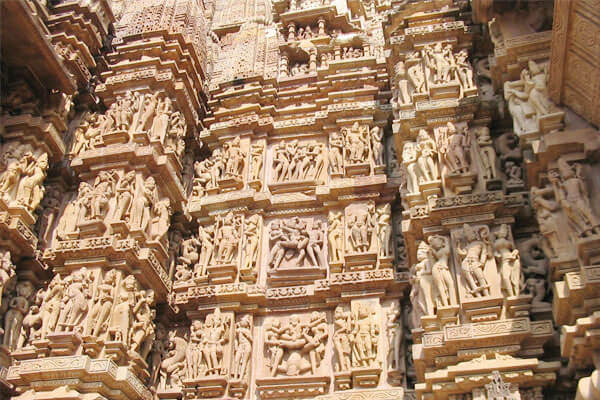 However, if the myth it is to be believed, Khajuraho was known as 'Khajur-vahika' or 'Khajjurpura' in the ancient times because of its golden date palms (known as 'khajur') that lined the gates of this city. It has been mentioned in the Mahoba-khand of Chandbardai's (the famous medieval court poet) 'Prithviraj Raso' that Hemraj, the royal priest of Kashi (the old name for Varanasi), had an exceptionally beautiful daughter named Hemvati, who was unfortunately a child widow. One summer night, while she was bathing in a lotus-filled pond, the Moon God was so dazed by her beauty that he descended to earth in human form full of lust and passion and ravished her. Later, he repented when the distressed Hemvati threatened to curse him for ruining her honor and dignity and blessed her with a valiant son who would later become a king and build the temples of Khajuraho. Hemvati left her home and gave birth to a brave and strong boy child in the tiny village of Khajjurpura. The child was named Chandravarman and it is said that by the time he was 16 years old, the glorious boy was strong and skilled enough to kill tigers or lions with his bare hands. With the blessings of the Moon God, his father he became a mighty king and built the fortress at Kalinjar. Then heeding to his mother's wishes he built 85 legendary temples surrounded by lakes and gardens at Khajuraho and also performed the bhandya yagya, to wash away the sins of his mother.

Yet another version of the above legend raises Hemvati as a dutiful daughter who sacrificed all her happiness and dignity for her father. Mani Ram, the royal priest of Kalinjar, miscalculated once and declared the dark night as the full moon night or Purnamasi in front of the king. Hemvati, his widowed daughter could not bear the possibility of any stigma on her father's reputation and prayed to the Moon God to uphold the word of the priest. However, she had to pay a heavy price for her wish being granted when the Moon God who was smitten by the lady's beauty ravished her in return for his favor. When Mani Ram came to know of this entire incident, he was so ashamed and grief-stricken that he cursed himself and turned into a stone. However, Hemvati got pregnant with the tryst and gave birth to a virtuous son by the name of sage Chandrateya who is believed to be the founder of the Chandela dynasty. Chandelas worshipped the Mani Ram-turned-stone as Maniya Dev.

Held every year from 25th February to 2nd March, Khajuraho Dance Festival takes place at the open-air auditorium in front of the Chitragupta Temple dedicated to the Sun God and the Vishwanatha Temple dedicated to Lord Shiva. They are situated in the Western Group of temples, which is the largest, well maintained and most easily accessible temple group of Khajuraho. Started regularly since 2002, this weeklong festival has already become legendary with its outlandish classical dance performances presented in a dreamlike setting of splendidly illuminated temples. Khajuraho temples present sculptures depicting various skills and arts of courtly love including dance and music in stone and what venue can be more befitting to hold the cultural festival highlighting the various classical dances of India! 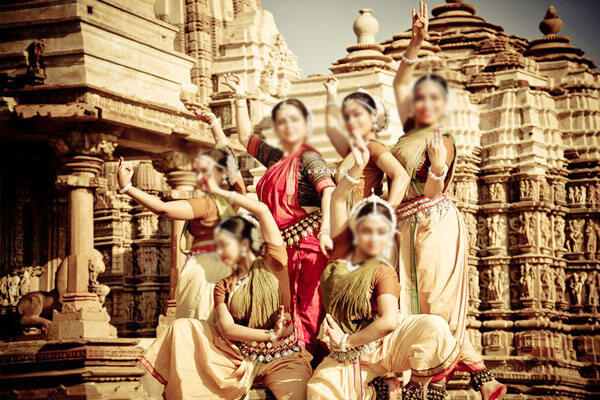 Some of the best artists and performers that have marked themselves in their fields come from the various states of India to participate in the festival and the performances including some of the best known dance styles such as the intricate footwork of Kathak, highly stylized and sophisticated Bharathanatyam, soft lyrical temple dance of Odissi, the dance dramas of Kuchipudi, Manipuri, the dance of rare and ancient civilization and Kathakali stage fights with elaborate masks. Recently, modern Indian dances have also found their place in the Khajuraho Dance festival. Along with the dance performances one can also see a number of craftsmen trading off their indigenous arts and crafts to the visitors.

Khajuraho group of temples in Central India is one of the most illustrious manifestations of Indian architecture. These 10th-11th century temples represent religiosity, patronage, artistic genius and aesthetic sensibility all at once. Built in the typical 'Nagara' style of architecture, over 20 of the original 85 temples have survived the climate for more than a thousand years despite being lost into obscurity and hence, suffering neglect for a long period of time. Believed to have been constructed during the Chandela rule, the temples belong to Shaivism and Vaishnavism sects of Hinduism, Jainism and 'tantrism'. Unlike other temple complexes in the country, there is no enclosure wall surrounding these temples and each of them on a high and solid raised masonry platform. Though not very large, they have elegant proportions and are adorned with sculptures on their exteriors and even interiors. 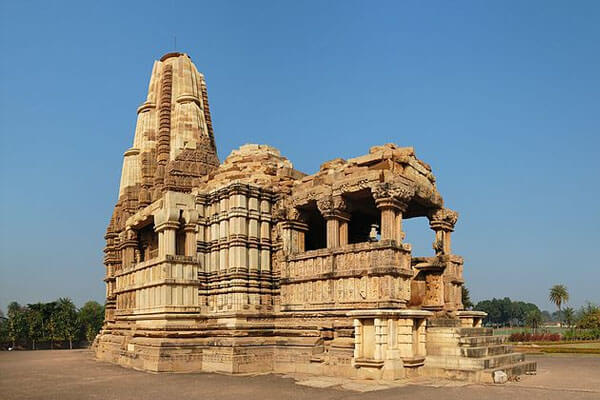 These walled sculptures include depiction of numerous deities, their attendants, celestial maidens in sensuous positions and provocative postures, embracing couples (some of them in erotic sexual positions), dancers and musicians and couples engaged in various refinements of courtly love. It is believed that one temple alone sports over six hundred and fifty such figures ranging from sensual and warm depictions to explicit sexual activity (believed to illustrate the tantric rites by some). Some of these much-famed or much-notorious sexual postures are said to follow the Kama Sutra, the ancient Indian manual of art of making love. One of the most preferred destinations after Taj Mahal, Khajuraho has provided a scenic backdrop for many movies as well as many Indian classical dances that have been performed here.

A Close Look At Khajuraho

Besides the temples exemplary for their architecture and bold artistic statement, Khajuraho is just a small modest village with no more than 3000 residents surrounded by the forestland. As Khajuraho gets a fair number of tourists from all over the world every year, hotels, restaurants and souvenir shops have sprung up in large numbers at the entrances to the two distinctive groups of temples here. Aeroplanes are not a thing of curiosity for the villagers anymore and the emblem of a warrior fighting a lion single-handedly and with his bare hands seen frequently at the temples is said to be the depiction of the valiant warrior-king who was the head of the clan of the Chandela Rajputs who built the temples. Chandelas are believed to be the descendants of the Moon God himself. The construction of the temples is said to have started in the mid- 9th century and continued until the early 12th century and due to the lack of records of the building activity, the names of the thousands of sculptors, architects and masons, who must have contributed in their construction has been lost forever into obscurity.

Chandela dynasty had already lost its glory by the time the last temple was completed. Khajuraho was the capital of the Chandelas for a brief period but for most of the part, it was their religious center. However, there have been many theories regarding the sculptures adorning the facades and interiors of the Khajuraho temples. Some of them believe these temples to be centers of tantrik mysticism, which regards sex as an important part of human development and the attainment of the Absolute. Others believe that they were constructed as such to lure men and women back to the family and worldly life, which play an important part in Hinduism, from the austerities preached by the Buddha that were gaining favor with people of that time. Since thick forests surrounded these temples thus shielding them from the Muslim armies. T. S. Burt, the British engineer who re-discovered the temples in the mid-19th century found the sculptures offensive. However, the local villagers and tribals have regularly used the temples ever since they were constructed, especially, the temple of Matangeshwar Mahadev for worshipping. It was General Alexander Cunningham who worked hard to gather details about them for the first time in his Survey of India reports. It was his efforts that stirred interest in people about the place. Later, the roads were constructed, facilities were provided for and luxury hotels were planned here and thus started the resurrection of Khajuraho.