Orchha is the erstwhile capital city of the Bundela rulers. The town is steeped in history and is famous for its palaces and temples built in the 16th and 17th centuries. The architectural splendor of the monuments in Orchha reflects the glory of its rulers. The Betwa River, on whose banks Orchha lies, and the forests around it attract tourist to this place. 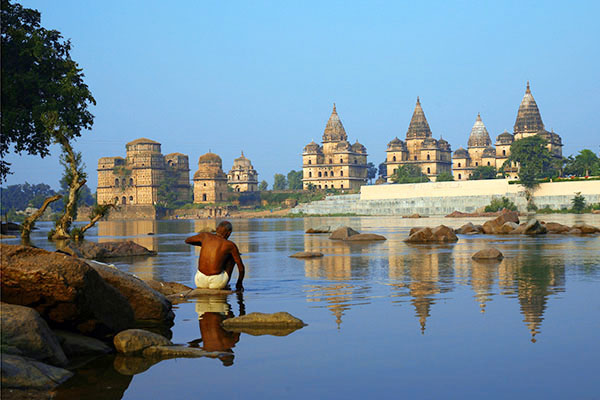 However, the situation changed in 1605, when Akbar died and Jahangir became the Mughal Emperor. In 1606, Emperor Jahangir visited Orchha. For the next 22 years until 1627, Bir Singh Deo had good relations with the Mughals. In 1627, when Shahjahan became the Mughal Emperor, Bir Singh revolted against the Mughals. However, this revolt was put down by Aurangzeb, the then 13-year old son of Shahjahan. Though the Mughals defeated the Bundelas, they revived their lost empire. In 1783, the Bundela rulers shifted their capital to Tikamgarh.

There are a number of tourist spots in Orchha. The main attraction of Orchha is the Orchha fort complex, located on an island on River Betwa, having a number of palaces to visit within it. A four-arched bridge leads to the fort complex on the island. The Jahangir Mahal, which was built by Bir Singh Deo in the early part pf the 17th century to mark the visit of the Mughal Emperor, is an important monument of this fort. It is known for its delicate work on one hand and balanced with strong masonry on the other. Raj Mahal, the second palace in this fort complex is well known for its murals, depicting religious themes. The Rai Parveen Mahal, dedicated to the 17th-century poetess-musician, is the third palace within this complex and is set amongst well-laid gardens.

There are a number of interesting temples to visit in Orchha. The Raja Ram Temple, which was formerly a palace, is an important tourist spot. According to legend, Lord Ram appeared in dream of the then ruler Madhukar Shah. The ruler subsequently brought an idol of Lord Ram and placed it in this palace, before installing it into a temple. However, when the time of installation approached, the idol refused to move from its present place. The king had to recall his dream, which had indicated that the idol would remain in the place, where it was first placed. Thus this palace became a temple and Lord Ram is worshipped here as a king. The Chaturbhuj temple in Orchha was the original destination of the idol of Lord Ram. This temple has been decorated with religious symbols on the outside, while the interiors are stark. The Laxminarayan temple is a unique blend of temple and fort architecture. The frescoes within this temple depict social and secular themes. These frescoes have retained their vibrant colors.

The Phool Bagh is a well-laid garden and was the resting place of the erstwhile Bundela rulers. This garden has fountains, pavilions and ingenious water ventilation system. Orchha has 14 chhatris or memorials for its rulers, situated near the Kanchan Ghat on River Betwa.

The Shahid Smarak commemorating the martyrdom of Chandrashekhar Azad, the great freedom fighter, is an important place to visit. Other places to visit in Orchha include the shrine of Siddh Baba Ka Sthan, Jugal Kishore, Janki Mandir, Dinman Hardul's palace, Sunder Mahal, and the Hanuman Mandir at Ochharedwara.