Enclosed by the northern tassel of the majestic Vindhyans, Bhimbetka in Bhopal is characterized by rock-strewn topography with thick woods and wrinkled precipices. The biggest depository of antediluvian knacks in India, Bhimbetka is a retreat of serenity and harmony for the picnickers. One of the most primitive dwellings of human race, Bhimbetka boasts of a history of 35000 years old. In fact, the place has witnessed a cultural sequence right from the late Stone Age to the early historic period. The flamboyant paintings that depict the living styles of primeval mankind are definitely a treasure house of information and a precious narrative in the history of man. 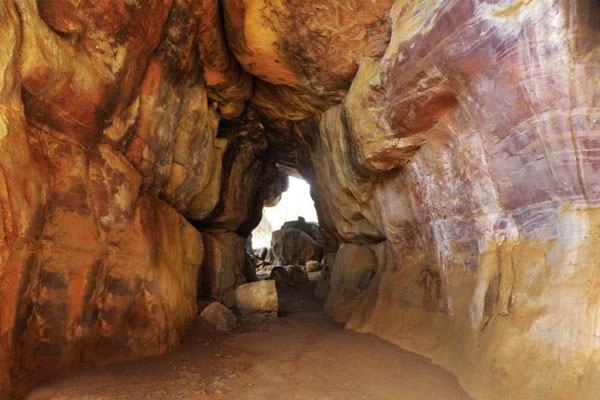 As the name itself suggests, this historic place is closely related to the legendary figure Bhim, the second in the Pandavas. The popular belief is that, it was here that Bhim took a brief rest during his exile. The word Bimbetka literally means Bim’s lounge.

A marvel in the archaeological perspective, Bimbetka is adorned with the accolade of being the richest depository of prehistoric paintings, in South Asia. It is the twenty second place in India, which is declared as a World heritage site by UNESCO. The Rock Shelters at Bhimbetka exhibit the earliest traces of human life in India. Archeologists are of the opinion that these caves might have been occupied over 10,000 years ago.

These paintings portray the transition of primitive man to a cultured human being. These paintings, which unearths the expectations and qualms of the inhabitants of the caves enthralls every visitor with its liveliness. It is quite amazing to note that the artists had shown great skill in portraying the sequence of events in his artwork. A wide spectrum of activities is being illustrated on the walls, which ranges from frescos of animals to the portraits of woman.

Bordered by impenetrable forests and wobbly crags, the site also offers spectacular sceneries and poses a treasure trove for bird lovers. The magnificent paintings in the rock shelters are the gateway to the primordial colonnade of Bhimbetka. If truth were told, each stone and every pendant rock in Bhimbetka would verbalize the miraculous history of human civilization. This unique archaeological location is a recommended spot for those who are really interested to acquaint with the primordial society.

A rare facility to go back to the roots of mankind makes touring in Bimbetka an unusual experience. Bimbekta paintings are not only finest artistic works but also it gives valuable tips about the earliest inhabitants.

Bhimbetka has hot and cool climate all through the years.

Summers (March to May) are hot and dry with temperatures soaring to 42°C and having a minimum of 25°C and typically tourists avoid the hot days in April and May.

Monsoons (June to September) dominate the climate here with moderate temperature and lot of heavy rainfall. Bhimbetka adorns greenish during the Monsoons.

Winters (December to February) are pleasant and sunny with minimum touching nearly 8°C in nights. Best season to visit Bhimbetka is between July and March.

April and May offer dry weather with high temperatures and so outings may be avoided. June to September is good for tourists liking the heavy intermittent rains. October to March is excellent for outdoors trips and sightseeing.

October and November are festival seasons with religious festivals like Diwali and Navarathri. February - March is attractive with Holi celebrations with imposing festivities and gaiety.