Places Of Tourist Attraction in Bhimbetka

One among the most desired tourist destinations, Bhimbetka Caves, in the state of Madhya Pradesh are bounded by the Vindhya mountain ranges. These caves were the dwellings of the aborigines of pre-historic times, which encompass marvelous paintings from Paleolithic to Medieval era. These paintings act as a glittering edifice that showcases the progression of human race in the course of time. These caves, which range up to a maximum of 600 caves, are famed for the exquisite cave paintings. Out of the 600 caves, only 12 are accessible to the public, which presents some of the oldest paintings in the world. 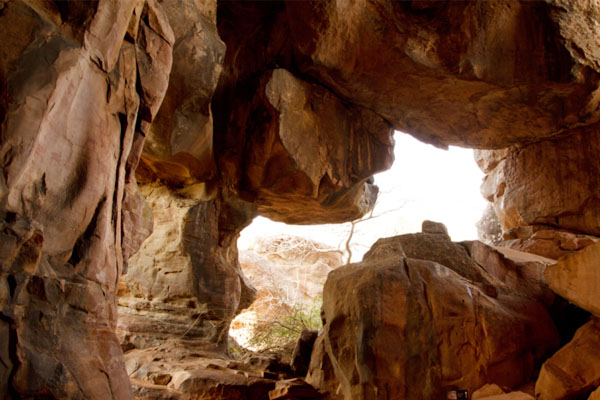 Concealed in the midst of teak and sal forests in the weathered crags, these caves were discovered by, Mr V S Wakankar in 1957 and they have gained many accolades with in this short span of time. The sand stone walls of Bhimbetka caves are ornamented with primeval native paintings and symbols that portray the daily life and ethnicity of the Stone Age people.

All the paintings and ciphers are classified into seven categories and the paintings exhibits a skillful presentation of events in the day-to-day life of the people lived in the caverns. The modish of the paintings of different periods is so diverse that one can easily distinguish between them. Huge linear figures of animals like bears, tigers and rhinoceroses belonged to the Paleolithic age. By the passing of time, the paintings befell smaller, and the artistic quality has shown little more creative. This fabulous depiction of events boasts of paintings that date back to 12000 years old. Natural red and white pigments used in the frescos managed to keep its vibrancy in its original charm.

The stockades of these caverns are the silent testimonials of the history of our ancestors who once toddled on this land. Bhimbetka caves are a perfect day-long jaunt, which allures the onlooker with its mesmerizing frescos.

The Bhimbetaka Rock Shelters are a credible source of information about the pre-historic life of Indian civilization. These paintings boasts of the societal life of the people lived in that era. These rock shelters are included in the prestigious world heritage site lists of the UNESCO.

Formerly found its mention as the Buddhist centers, this rock shelters are recognized as the dwellings of the pre-historic man during the year 1957. The entire area is covered by substantial vegetation, has copious natural resources, natural shelters, with perennial water supplies. 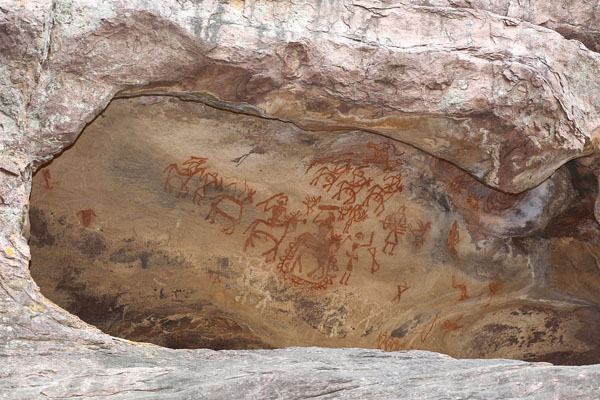 Bimbetka Rock shelters are classified as Lakha Juar group and Bhimbetka group, which depict an incessant progression of Stone Age cultures. These shelters are acclaimed as the oldest stone floors and wall in the entire world itself. The outstanding feature of this rock shelters are its downy nature with implausible contour, stunning tinges and feels.

The rock shelters and caves of Bhimbetka have a number of interesting paintings which depict the lives and times of the people who lived in the caves, including scenes of childbirth, communal dancing and drinking, religious rites and burials, as well as the natural environment around them. Besides the hub of aboriginal information, these stunning rock formations are excellent study materials for a geologist.

The superimposition of paintings shows that the same canvas was used by different people at different times. The drawings and paintings can be classified under seven different periods:

These are linear representations, in green and dark red, of huge figures of animals such as bisons, tigers and rhinoceros.

Similar to the paintings of Chaleolithic pottery, these drawings reveal that during the period, the cave dwellers of this area had come in contact with the agricultural communities of the Malwa plains and started an exchange of their requirements with each other.

The figures of this group have a schematic and decorative style, and are painted mainly in red, white and yellow. The association is of riders, depiction of religious symbols, tunic-like dresses and the existence of scripts of different periods. The religious beliefs are represented by figures of yakshas, tree gods and magical sky chariots.

These paintings are geometric, linear and more schematic, but show degeneration and crudeness in their artistic style.