Place of Interests in Gwalior

Home
/
Place of Interests in Gwalior

Places Of Tourist Attraction in Gwalior

Massive Gwalior Fort, popularly called the Gibraltar of India, overlooks the city. Emperor Babur reputedly described it as "the pearl in the necklace of the forts of Hind." This fort's architecture is unique. It shows Chinese influence on Indian architecture, as Chinese dragons have been crafted at the hilt of the pillars. This influence was because of trade between China and India during that period. After the death of Sher Shah Suri in 1545, who was ruling the North India at that time, his son Islam Shah shifted his capital from Delhi to Gwalior and constructed 'Sher Shah Mandir' or Palace/Fort in the memory of his father Sher Shah Suri. Islam Shah operated from Gwalior till his death in 1553. 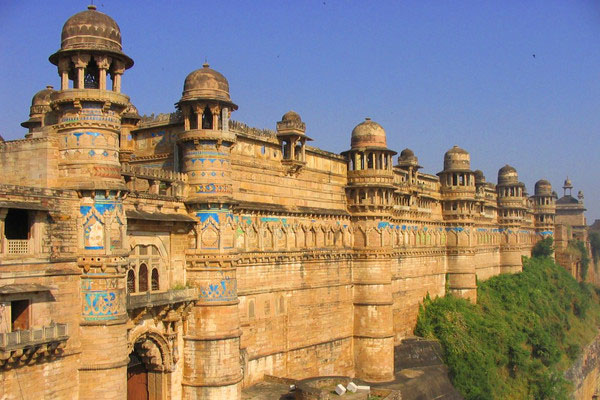 Islam Shah had appointed the Hindu warrior 'Hemu' or Hem Chandra Vikramaditya as his Prime Minister in Sher Shah Fort for the first time, who later on became the Vikramaditya king at Delhi and established 'Hindu Raj' in North India, by virtue of winning 22 battles continuously from Punjab to Bengal and defeating Akbar's army in Agra and Delhi on 6 October 1556. He is also known in history as Samrat Hem Chandra Vikramaditya.

View from the summit of the Gwalior Fort showing the palace of the Maharajah of Scindia. Circa 1882. According to history, the original fort of Gwalior was founded by the Bargujar Kings during the 34th/35th century of Kali yuga as per puranas available with them. His palace is the most interesting example of early Hindu work of its class in India. Another palace of even greater extent was added to this in 1516. The Mughal emperors Jahangir and Shah Jahan added palaces to these two, the whole making a group of edifices unequalled for picture sequences and interest by anything of their class in central India. Among the apartments in the palace was the celebrated chamber, named the Baradari, supported on 12 columns, and 45 ft (15 m) square, with a stone roof, forming one of the most beautiful palace-halls in the world. It was, besides, singularly interesting from the expedients to which the Hindu architect was forced to resort to imitate the vaults of the Muslims. Of the buildings, however, which so excited the admiration of the first Mughal emperor Babur, probably little now remains.

The Telika Mandir or 'oil-man's temple', owes its name to Teli, a term for an oil grinder or oil dealer. Many suggestions have been put forward to explain this name historically, but in actual fact the name is not old, the temple being used for processing oil before the British occupied the fort and used the building, albeit temporarily, as a coffee shop. The Telikā Mandir is the loftiest temple among all the buildings in Gwalior fort with a height of about 30m. The temple consists of a garbagriha, that is sanctum proper for the deity, and an antarala to enter into the temple. It can be approached by a flight of steps provided on the eastern side. The most striking feature of the temple is the wagon-vaulted roof, a form used over rectangular shrines which normally accommodated a row of Mother Goddesses.[8] The goddesses from the interior vanished centuries ago and have not been traced, even in fragments. The exterior walls of the temple are richly decorated with sculptures many of which are damaged; the niches, shaped like temples, are empty. The building carries a dedicatory inscription to the goddess in a niche on the southern side, but otherwise does not have any history. The architectural style, discussed by a number of architectural historians, points to a date in the late eighth century. The building was thus erected just as the Gurjara Pratihāras were asserting their power over central India. The entrance gateway on the eastern side is a later addition of the British period, made by Major Keith in 1881. It was erected as a way of saving various historic pillars and other pieces no longer in their original context.

A striking part of the Jain remains at Gwalior is a series of caves or rock-cut sculptures, excavated in the rock on all sides, and numbering nearly a hundred, great and small. Most of them are mere niches to contain statues, though some are cells that may have been originally intended for residences. According to inscriptions, they were all excavated within a short period of about thirty-three years, between 1441 and 1474. One of the colossal figures is 57 ft (17 m) high, taller than any other in northern India. GGGwalior fort also has the Gurudwara Data Bandi built in the memory of the sixth Sikh Guru Har Gobind. This Gurudwara is particularly large and grand, built entirely of marble with colored glass decorating the main building. Recital of the Guru Granth Sahib creates a peaceful and sacred atmosphere. Mughal kings used to visit Gwalior regularly. 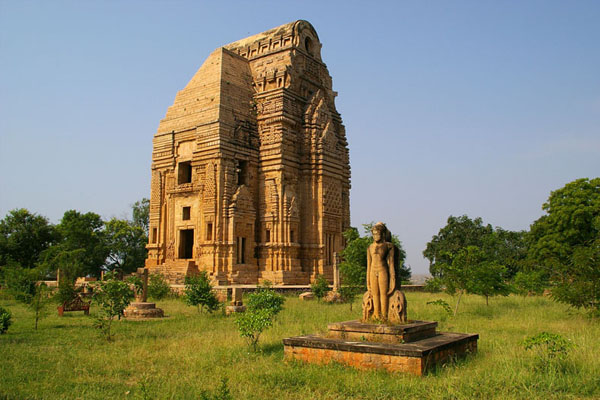 Within the fort are some marvels of medieval architecture. The 15th century Gujari Mahal is a monument to the love of Raja Mansingh Tomar for his intrepid Gujar Queen, Mrignayani. The outer structure of Gujari Mahal has survived in an almost total state of preservation; the interior has been converted into Archaeological Museum housing rare antiquities, some of them dating back to the 1st century A.D. Even though many of these have been defaced by the iconoclastic Mughals, their perfection of form has survived the ravages of time. Particularly worth seeing is the statue of Shalbhanjika from Gyraspur, the tree goddess, the epitome of perfection in miniature. The statue is kept in the custody of the museum's curator, and can be seen on request. 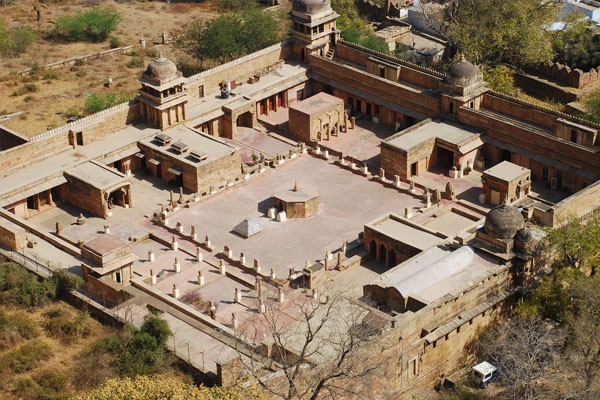 Built between 1486 and 1517 by Raja Mansingh.The tiles that once adorned its exterior have not survived, but at the entrance , traces of these still remain. Within the palace room’s stand bare, stripped of their former glory, testifying to the passing of the centuries. Vast chambers with fine stone screens were once the music halls, and behind these screens, the royal ladies would learn music from the great masters of the day. Below, circular dungeons housed the state prisoners of the Mughals. Emperor Aurangzeb had his brother , Murad imprisoned , and later executed here. Close by is Jauhar Pond, where in the Rajput tradition, the Ranis committed mass sati after their consorts had been defeated in battle. 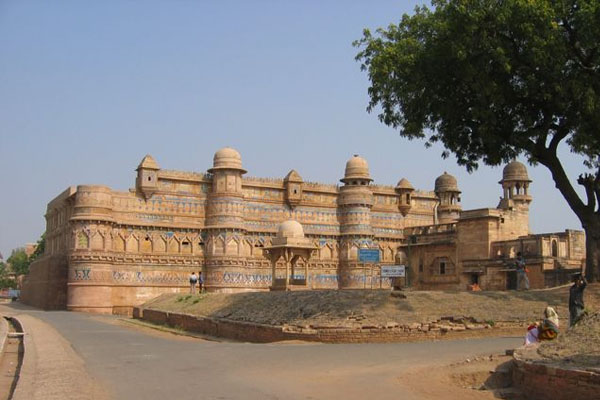 At Man Mandir Palace, a poignant ambience of those days of chivalry and heroism still lingers in the silent chambers. A superbly mounted Son-et-Lumiere here brings it all alive every evening.

The sandstone mausoleum of the Afghan prince, Ghaus Mohammed, is also designed on early Mughal lines. Particularly exquisite are the screens which use the pierced stone technique as delicate as lace. It is on the way to Gwalior fort near Hazira from Railway Station. 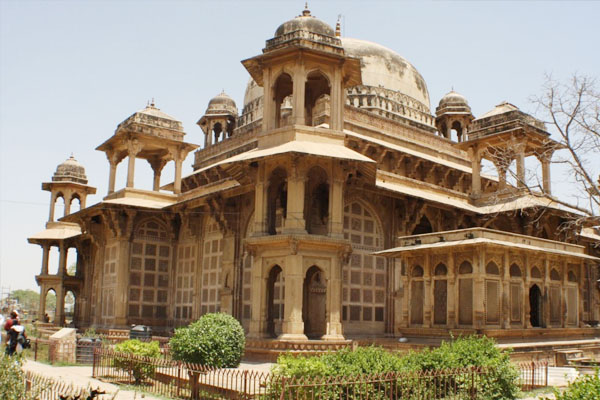 Built in the memory of Guru Hargobind Saheb , the 6th Sikh Guru who was imprisoned here by Emperor Jehangir for over two years. It is located on the Gwalior Fort. Distance from Railway Station / Bus Stand: 6.00 Kms Approx. 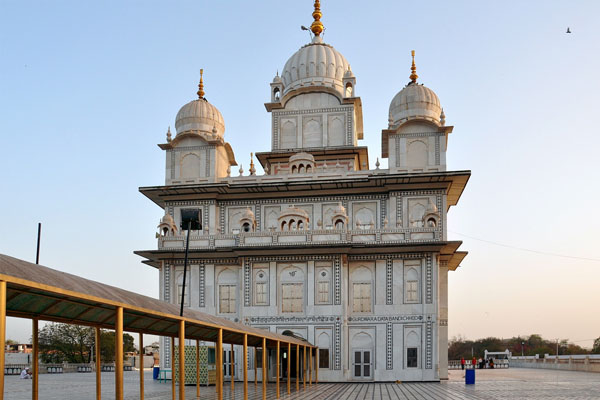 Situated on the Mountain Area at slopes of Gwalior Fort carries unique statue of Jain Tirthankars. The largest Idol of Bhagwan Parshwanath on Lotus is the largest statue(in single stone piece) in the world, being 47 feet high and 30 feet in width. 26 Jain statues in a series give a beautiful and attractivce picturescue. Built between 1398 to 1536 by Tomar Kings - these Jain Tirthankars Statues are a species of Architecture and a treasure of Old Indian heritage and culture.
Distance from Railway Station / Bus Stand: 2.00 Kms Approx. 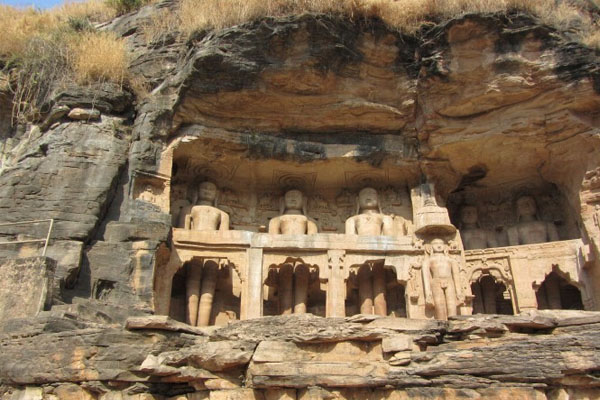 Located near the Residency at Morar, the newly constructed Sun Temple takes its inspiration from the famous Konark Sun Temple in Orissa.
Distance from Railway Station / Bus Stand: 5.00 Kms. Approx. 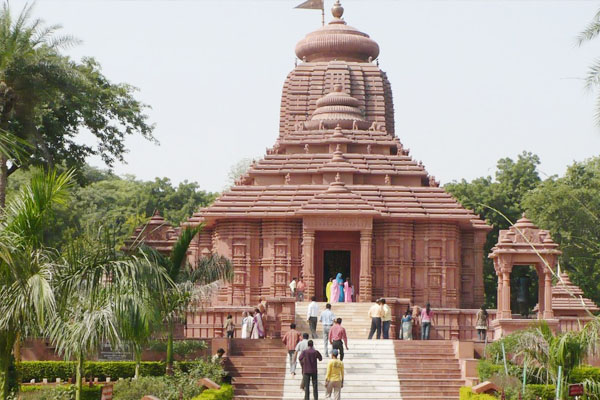 This Museum of Music has been set up in the old ancestral house of the legendary Ustad Hafiz Ali Khan. It houses ancient instruments of the great Indian Masters of yester years. It also houses an impressive collection of photographs and documents. Sarod Ghar is a unique institution devoted to promoting Indian classical music, heritage and culture. Through this 'window' to the past, music lovers can gain a better understanding of the evolution and history of our classical music and a deeper perspective and insight into the context of the art as it exists today.
Ustad Hafiz Ali Khan Memorial Trust, Hafiz Ali Khan Road, Jiwaji Ganj, Lashkar, Gwalior - 474001
Timings: 10.00 AM to 5:00 PM (Lunch time: 1:30 PM to 2.00 PM)
Distance from Railway Station / Bus Stand: 5-6 Kms. Approx. 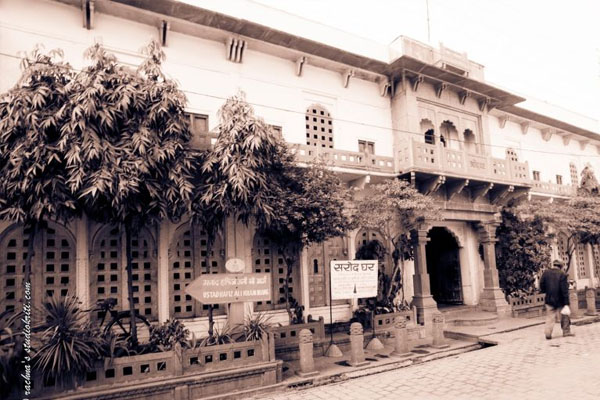 A splendor of a different kind exists in the Jai Vilas Palace, current residence of the Scindia family. Some 25 rooms have been turned into the Jivaji Rao Scindia Museum, and in these rooms, so evocative of a regal lifestyle, the past comes alive. Jai Vilas is an Italianate structure which combines the Tuscan and Corinthian architectural modes. The imposing Darbar Hall has two central chandeliers weighing a couple of tonnes, and hung only after ten elephants had tested the strength of the roof. Ceilings picked out in gilt, heavy draperies and tapestries, fine Persian carpets and antique furniture from France and Italy are the features of these spacious rooms. 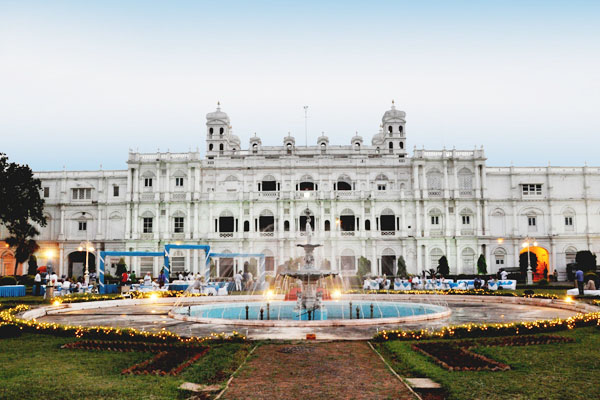 Eye catching treasures include: a silver train with cutglass wagons which served guests as it chugged around the table on miniature rails; a glass cradle from Italy used for the baby Krishna each Janmashtami, silver dinner services and swords that were once worn by Aurangzeb and Shah Jahan. These are, besides, personal momentoes of past members of the Scindia family: the jeweled slippers that belonged to Chinkoo Rani , four-poster beds, gifts from practically every country in the world, hunting trophies and portraits. The Scindia Museum offers an unparallel glimpse into the rich culture and lifestyle of princely India.
Timings: 10.00 AM to 5:00 PM: Wednesday Closed
Distance from Railway Station / Bus Stand: 1.5 -2 K ms. Approx.

The Gujari Mahal Archaeological Museum houses rare antiquities, some of them dating back to the 1st century AD. Even though many of these have been defaced by the iconoclastic Mughals, their perfection of form has survived the ravages of time. Particularly worth seeing is the statue of Shalbhanjika from Gyraspur, the tree goddess, epitome of perfection in miniature. The statue is kept in the custody of the museum's curator, and can be seen on request. The museum is open every day except Monday, from 10 am to 5 pm. 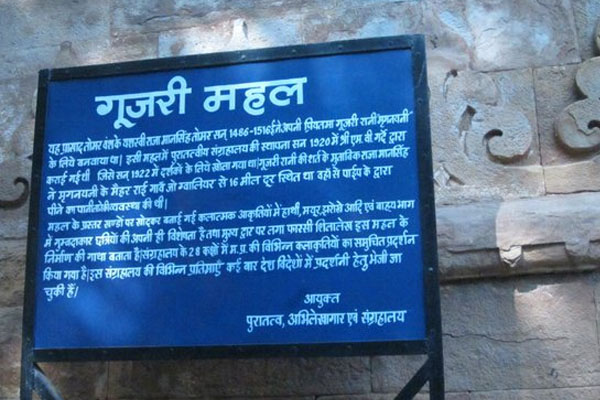 The Kala Vithika is another treasure house of the arts. It remains closed on Sunday and public holidays. The Municipal Corporation Museum, which is open all days except Mondays, has a very fine natural history section. The old ancestral house of the legendry Ustad Hafiz Ali Khan has recently been converted into 'Sarod Ghar' - Museum of Music by the Ustad Hafiz Ali Khan Memorial Trust under the patronage and guidance of his great son and sarod maestro Ustad Amzad Ali Khan. The museum has been rebuilt keeping in mind the old traditional architecture of Gwalior and houses in it ancient instruments of the great Indian Masters of yesteryears.

Gwalior Zoo, open every day from 8 am to 3 pm, has some rare species of Indian wildlife kept in natural surroundings.